Celia, sometimes referred to as Cecelia, or Cecilia, was the fourth child, and third daughter, of Esther SPENCER and Thomas STUBBS. She was born on the 13th March 1805, in Sydney, Australia.  She was baptised at St Phillips Anglican Church near their home. Her mother was Jewish, but Anglicanism was the only approved religion in NSW at the time and there was no possibility of any Jewish rites being observed.

Celia’s parents went on to have another five children. Both Esther and Thomas were convicts.  They ran the “first respectable boarding house in Sydney”, from a property in Phillip Street, which is now one of the busiest thoroughfares in Sydney’s CBD. Thomas was a builder, and he and Esther were also dealers, selling goods from arriving ships. Thomas died in January 1815 and 18 months later Esther had another child to Joseph BIGGE, coachman to Governor McQuarrie. He was a neighbour in Phillip Street, where he had a livery and stables.

In 1820 Celia, aged 15, sailed to India on the “Seaflower”, departing Sydney on 18th May. The record of the Master, crew and passengers, as shown, states her age to be 18, and that she was travelling with the consent of her mother. Her mother still had many dependent children so despatching one of the older girls to an independent life, perhaps supported by a sibling, would have been regarded as sensible.

Celia’s older brother Thomas is said to have been “the first notable native-born European-Australian musician. At about age 10 he left Australia and joined the army, serving in India in the 24th Regiment until 1823. He was stationed at Gosport in December 1823, and Devenport in 1825 (both in England), where he was also listed as being on duty in the regimental band. He was discharged at Cork, Ireland, in February 1825, and arrived back in Sydney on the Lonach on 4 September 1825.

On the basis of this information it would seem reasonable to assume that Celia was going to India to join or visit her brother, whose role in the military was as a musician/boy soldier.  However, the name of the third passenger on the Seaflower list is Richard Williams. A Williams family were neighbours in Phillip Street to the Stubbs family, so it would also be reasonable to speculate that Celia was either being escorted by Richard, who was a few years older than her, or was already in a relationship with him, and it was he who had decided to go to India.

The family history of Richard Williams is not clear. The likelihood is that this Williams family were originally Welsh. Both names are very common, particularly in Wales. Whether the family came to Australia as free settlers or convicts is unknown.

There was a significant amount of trade from India from the earliest days of settlement in NSW, and India was an important source for stores, supplies and foodstuffs before the colony finally began growing and processing its own agricultural products nearly 10 years after the arrival of the First Fleet in 1788. There would therefore have been regular shipping services to and from India, and knowledge of opportunities for settlement would have been easy to come by.

What is indisputable is that  not long after Celia's arrival in India she had a son, whom she called James, about whom little else is currently known. It is assumed that the father was Richard Williams. Five years later, on 10 June 1825, Celia and Richard Williams married. According to India Office records held at the British Library in London  for marriages conducted in the Bengal Presidency "Richard Williams, Merchant of Calcutta, Bachelor, and Celia Stubbs, Spinster, were married in the Church of St Mary's, Benares, Calcutta on the 10/11th (or could be 24th) of June 1825.” The names of the witnesses to the marriage are illegible but could be Margaret Travis? Stubbs? James ?

By the time of the marriage Celia would have been 20, and Richard possibly 35. He seems to have taken up business as an indigo planter. Indigo is a plant which produces the blue dye most commonly used these days for jeans. Read more about indigo here.

During the next 10 years Richard and Celia had five children:

It is clear from this evidence that neither Celia nor Richard returned to Australia during this 10 year period. However Richard then disappears from the record and no trace has yet been found of his whereabouts after 1835. One suggestion is that he died in Liverpool in 1837, as a seaman, though this has not been verified and seems somewhat at odds with the other information about Richard and his occupation.

The next time Celia features in records so far traced is when she embarks on a second marriage, in Sydney, in 1840. This suggests two things in particular – Richard Williams had died and Celia was free to remarry, and she had returned to Sydney sometime after 1835. She may of course have simply presented herself as a widow on her return to Sydney. Her new husband was George Abraham KENNETT, about whom not a lot is known, except that he was a convict who arrived on the Lady Harewood in March 1832. He was married and his wife accompanied him as a free settler. She died in 1839, and by August 1840 George was requesting permission to marry Celia. George Kennett seems to have run a livery stables in Phillips Street, so may have been known to Celia's mother Esther Spencer. Perhaps Celia and her children had been living with her mother since her return from India, and had developed a relationship with George. Permission to marry was granted once it had been satisfactorily ascertained the previous Mrs Kennett had actually died.

The marriage between Celia and George took place on 26 August 1840, and two years later on 6 August 1842 Celia and George had a daughter, Georgiana, born in in Sydney.  Although Celia lived for another 54 years, and had at least two more children, the details of her life after Georgiana's birth are sketchy, and frequently confusing. A few facts have been found, and from these a possible story line for the next 10 years or so has been constructed, but it quickly deteriorates into rampant speculation and then further into nothingness. Read more about the reconstruction on the following page. 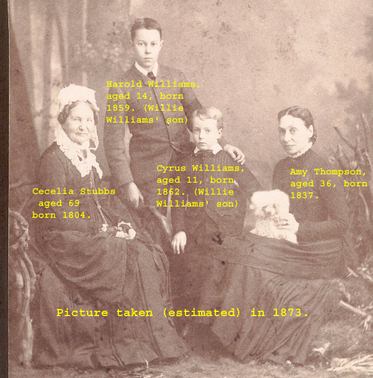 This photo, which has appeared elsewhere on the web, contains captions which seem to be accurate regarding the two women - Celia Stubbs (Wiiliams/Taylor) and her daughter Amy. However, the younger boy is unlikely to be 11 years old, and may or may not therefore be Cyrus Williams. Or the older boy is not Cyrus's older brother Harold, aged 14 in 1873, or the photo was taken earlier than 1873. The age difference between Cyrus and Harold was only 3 years. 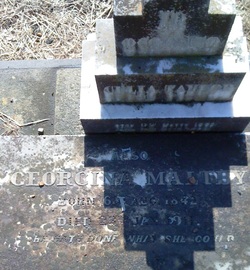 This photo of Celia Taylor's grave in Kew Cemetery, Melbourne, was taken in very poor lighting conditions on 28 August 2010. The inscription on the upright stone says "In Memory Celia Taylor Died 13th December 1896". In front the inscription says: "Also Georgina Maltby. Born 6th Aug 1842. Died 23 Jan 191. She Hath Done What She Could"