Lochinvar House, Kaludah Estate, photographed in 2008. Photo Barbara Mulligan
When John Frederick DOYLE and his family moved to their newly purchased property across the Great Dividing Range in the Hunter Valley from the Hawkesbury on 7 July 1859 they weren’t, it would seem, turning their backs entirely on their long held Hawkesbury farm “Dargle”. Their eldest son, also John Frederick, was granted “Dargle”, and the property remained in the family for many more years.

The parents, John Frederick and Ellen and their younger children, took up residence at Lochinvar Estate, close by the Hunter River, about 11 kilometers upstream from the township of Maitland. Lochinvar was one of the earliest large land grants in the Hunter Valley, and has an interesting history.

The Hunter Valley had been opened up for settlement after Henry Dangar [i]  was sent to survey the plains north of Newcastle in 1822-23. Previously (in 1820) John Howe, Chief Constable of Windsor and a party had pushed across the Great Dividing Range and found a route to the plains further north (which became Patricks Plains, around Singleton) and settlement had begun, though on an informal and unauthorised (squatting) basis initially. Once Dangar’s survey was completed the first land grants for the area were made. The Doyle family from the Haweksbury were amongst those early explorers and developers of the northern Hunter valley, and Doyle’s Creek, in the foothills of the Great Dividing Range west of Singleton (and Jerrys Plains) is most likely named after Cyrus Matthew Doyle, John Frederick’s oldest brother, who is thought to have been with the Howe group in 1820. His oldest son eventually married one of John Howe’s daughters (in 1837). Cyrus Matthew acquired a land grant of 360 acres on Jerrys Plains in 1825, about 20 kms south west of Muswellbrook. A further 500 acres were reserved. He named this property Lucan Park.

The Lochinvar Estate was a land grant of 2,000 acres made in 1822 to a wealthy young Scotsman Leslie Duguid.  The land granted was in one of the best locations in the district being close to Maitland and having river frontage, a large lagoon, alluvial land and good hill country. Additionally the main road through the valley traversed the estate.[ii]  As per regulations of the time Duguid was also provided with 20 convicts to begin development of the property. An overseer was appointed as Duguid preferred to live in Sydney where he mixed with the social elite, and made several extensive visits to Scotland. It is said he named the property Lochinvar after the romantic hero and key character in Sir Walter Scott’s epic poem Marmion. The lagoon he also named, calling it Loch Katrine, after the loch in Scotland which part inspired Scott’s poem “The Lady of the Lake”.

A house was built for the overseer and there was a barn, dairy, corn house, and other huts for workers. By February 1829 the property had at least 100 horned cattle and 1,400 sheep. In 1835 there were incidents with bushrangers, and the following year the overseer, John B(o)urke was killed in a fall from his horse. In early 1840 Duguid had the estate surveyed and subdivided into 70 lots and put up for sale. Part of the subdivision was intended for a village, to be called Lochinvar at one of the bullock stops on the route from Maitland heading north.
The largest acreages for sale were Lots 1 and 2 which contained the richest alluvial land. There was a well-established house and associated structures (store, cellar, dairy, granary, stables, blacksmith’s shop) as well as well-established garden and orchard. These were purchased by the Scottish Australian Investment Company, also called the Aberdeen Company, who installed John Garland as manager. The house, which was only four rooms, was enlarged, using bricks made on the site. The house needed to accommodate 11 Garland children.
It is not known exactly when the first vines were plants but it could have been as early as 1841, and while they were maturing an external in-ground cellar at the rear of the house was constructed.

In 1847 the Hunter Valley Vineyard Association (HRVA) was formed, and amongst the 18 initial members was a John Elliott Blake who had taken over from John Garland, probably about the time the Association was formed. Blake had managed other vineyards in the area. His membership listing was “John Elliott Blake of Kaloudah”, which is the first time on record that the winemaking on Lochinvar Estate carried this name. Kaloudah, or its shortened version Kaludah, then became interchangeable with Lochinvar. This naming tradition continues as Lochinvar House still stands on the Kaludah Estate.

“Possibly the name Kaloudah was adopted to identify the wines made on the estate, the name Lochinvar being, since the 1840 sale and village development, too generic. “[iii]

In the 1850’s a Frenchman Monsieur Phillibert Terrier was engaged to develop and improve the winemaking at Kaloudah. Terrier was instrumental in the development of winemaking on several properties in the Hunter while engaged at Kaloudah and is one of the most critical persons in raising quality and standards of Hunter Valley winemaking which have been maintained until today.

In 1858 the Aberdeen Company decided to divest itself of wine growing interests to invest in coal mining, and Lochinvar/Kaludah, then comprising 526 acres, was put on the market. On 7 July 1859 the sale to John Frederick Doyle was completed and his family moved in. Blake and Terrier remained on the property, leasing the vineyard and associated facilities, remaining until about 1862. Presumably John Frederick used the three years since purchasing Kaludah to learn about growing grapes and making wine.

By 1860/61 Kaloudah wines had become well-established, and John Frederick had planted more acreage in grapes. According to a lengthy descriptive article in the Maitland Mercury and Hunter River General Advertiser on 16 November 1865, winemaking had become hugely successful at Kaludah, and the estate was a picture of excellent farming practice and productivity. It seems John Frederick was both a first class farmer and an astute businessman, and his property was making the most of its natural advantages such as rich alluvial soils as well as being expertly developed and managed.

The success of the winemaking seems to have resulted from the combination of Terrier’s winemaking expertise and John Frederick’s farming skills, and the relationship between them appears to have been a most positive and productive one. Evidence of the importance of this relationship surfaced in 1867 when Terrier and his wife purchased two of the lots of the original Lochinvar estate on the south side of the road traversing the estate (and therefore across the road and facing Kaludah) and established their own vineyard, called St. Helena. Title deeds for this property indicate JF Doyle assisted Terrier to secure the land.[iv]
Two years after the article was published Andrew James Fitz Doyle, the second eldest son (1836-1904), known to the family as James, who had been working on or managing family properties on the Barwon River in northern NSW, arrived at Kaludah to live and to be trained by Terrier in the vineyard and in winemaking. When John Frederick and Ellen left Kaludah in 1879 to move further inland James took over full management of the estate, his father then retiring. James ran the property until his death in 1904.

The quality of Kaludah wines was confirmed when word was received in 1874 that one of them had won a medal at the London International Exhibition in 1873. James Doyle and Phillibert Terrier were among the winners of awards at the Melbourne International Exhibition of 1880. In 1895 a journalist noted that “to enumerate all the various medals and cups obtained at various exhibitions by the Kaloudah white and reds would occupy too much space”. [v]

By 1881 John Frederick was obviously considering how he would distribute his properties and estate after his death. He “sold” Kaludah/Lochinvar to James for £5,000 (“an estate in inheritance”), spelling out the details thus:
“All that land containing 517 acres 31 perches being Lots 1-12 on the original plan, together with the capital messuage and dwelling house thereon and also the two brick built houses, Entrance Lodge, cellars, stores, stables, barns, granary and outbuildings thereto belonging and now in the occupation of the said AJFD with all other houses, ways, rights of way, paths, passages, buildings, lights, fences, waters, watercourses, privileges, easements and appurtenances  to the said lands and hereditaments etc. and all income etc. rents and profits……”
These provisions meant James was able to both sell a small allotment and commission a major reconstruction of the main house. James seems to have been living until then in one of the two smaller brick cottages mentioned above. A well-known local architect JW Pender was at the time designing some of the grandest homes in the district, and making extensive additions and alterations to others, and he was commissioned to draw up plans for Kaludah. Tenders for building work were published in the local paper in August 1882 and Benjamin Hodgson began work soon after. The “Pender addition” to the original large 3-roomed dwelling, each of which had no interconnecting doors but was accessed via either an internal hall or the external verandah, is an L-shaped wing wrapping around the south and west sides of the original. The new floor level is a step above the original floor level to provide better subfloor ventilation. It is a long low rectangular building, sitting flat on the ground under a tall hipped roof. Its fairly plain with few decorative features, but the verandah has a skillion roof[vi] dropping to a very low eave supported on cast iron columns.

James lived in the house until his death in 1904, as a single man, never having married. He shared the house  with his unmarried sister Louisa, leaving her a life interest in it. Louisa died in 1932, having lived in the property for 73 years.

The winemaking ceased sometime before James died, and probably in the 1890’s. The cause for stopping production, according to Cyrus Williams’s[vii] Journal:

“In the early days, Kaludah made various kinds of wine, but later confined itself to “Kaludah Red” and “Kaludah White", the former a very fair claret and the latter a very good light “Hock”. Both these wines were good but did not hold their own on the market, partly from want of enterprise by James, and partly on account of a disease which got the cellars, necessitating the destruction of all the wine in stock at the time.”

Kaludah then became a dairy farm, and was sold out of the family on Louisa’s death. Cyrus also wrote in his Journal that James was somewhat unfair in passing on the property on his death in 1904, leaving it to his nephew Maurice, son of his older brother Cyrus, rather than to Harold Doyle, a second cousin, son of his cousin Louis. Harold had apparently worked for and alongside James for many years, and been treated as a son.  Louisa attempted to put this injustice to rights when she died, leaving the whole of her estate to Harold, which Cyrus (Williams) considered to have been a measure of setting to rights the injustice wrought.

Kaludah is these days privately owned and is managed as a Bed and Breakfast[viii]. The owner has implemented an extensive restoration programme, reinstating the facilities of the property as it was in its wine producing heyday, to the extent this is possible.  Their dedication to this heritage task is commended. The owners have also been generous in sharing the Conservation Management Plan which they had produced by Ecotecture[ix] in December 2005, from which much of the above information has been extracted.

[vi] A skillion roof has one single flat surface and has a steeper and more noticeable pitch than a standard flat roof.

[vii] Grandson of John Frederick and nephew of James and Louisa 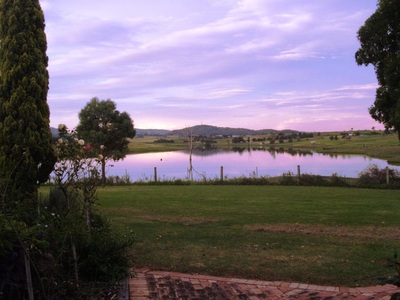 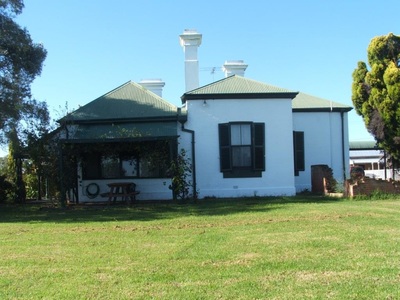 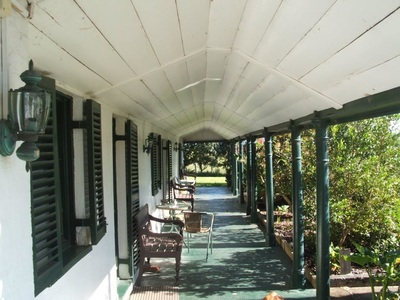 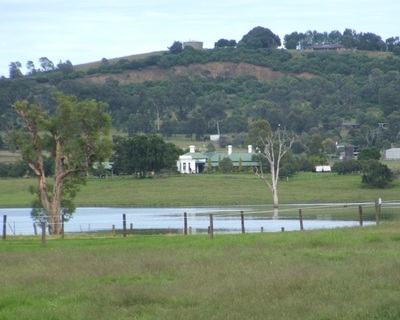 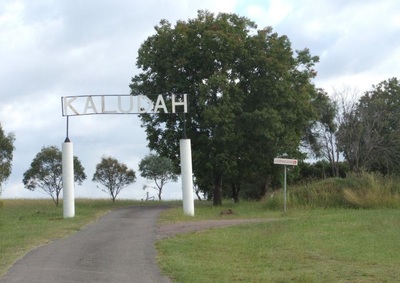 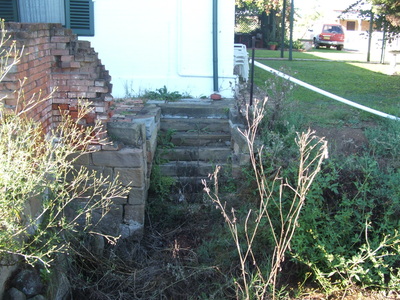 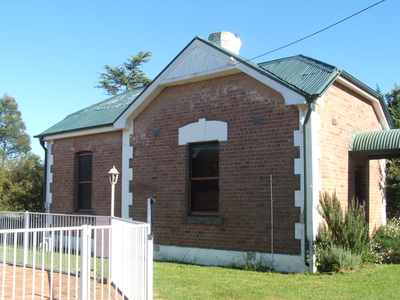 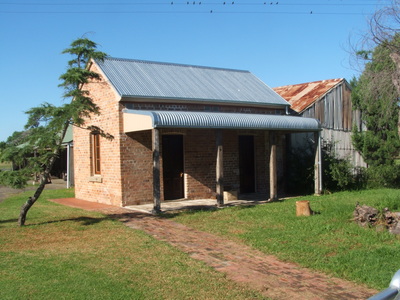