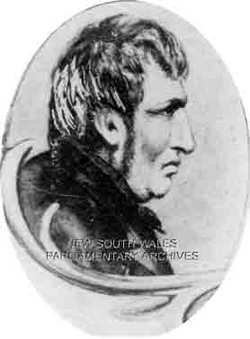 Captain William RUSSELL, MLC NSW
Augusta was the second child of Captain William Russell and his wife Jane. There were another 10 children in the family. Captain Russell was born in Woodbridge, Suffolk in 1806, and he was a military officer. He is thought to have arrived in NSW in 1836 and married Jane Rebecca Griffiths JAMISON in Penrith in 1841. They then had 11 children, the last being born in 1862. Augusta was the third child, and the oldest of three daughters. Captain Russell became an agriculturalist and pastoralist at Ravensworth in the Hunter River district. Ravensworth is about halfway between Singleton and Muswellbrook, both places where various members of William’s first wife’s family lived. It is entirely possible that the Doyle and Russell families knew each other. Ravensworth is now the site of the Ravensworth Underground Mine (RUM) one of a number of large coal mines in that area of the Hunter Valley.

Captain Russell acquired extensive freehold property in settled districts and in 1859 held 117,041 acres of adjacent land under the pre-emptive leases allowed big landowners. He also held 11,840 acres in settled districts under auction lease, and was a squatter[i] in Gwydir district. He thus became one of the significant runholders in the District, and this perhaps inevitably led him into politics. In 1859 he became a Member of the NSW Legislative Assembly, as the Member for Patrick’s Plains. The area which was known as Patrick’s Plains was very large – from the foothills of the range between the Hawkesbury and Hunter Rivers to the south, Maitland (then called Wallis Plains) to the east down river, and spread out into unknown country to the north and west. Districts as far afield as Scone (Invermein) and Merriwa (Gummun Plains) were included.

On 3 September 1861 Captain Russell was awarded a Life Appointment as a Member of the NSW Legislative Council, which he retained until October 1865. Less than six months later he was dead. He is said to have died at Tarban Creek which is a waterway that runs into the Parramatta River about halfway between Parramatta and Sydney Harbour. The suburb of Hunters Hill rises to the north of Tarban Creek. Presumably Captain Russell was buried somewhere around Tarban Creek, or Tarban Creek was the place of Registration of the death. Alternatively he died at and was buried in the cemetery of the Tarban Creek Lunatic Asylum. His death certificate has been ordered and the details within it may assist with resolving the facts about his death.

Update (6 May 2015): William Russell's death certificate records his death on 2nd April at the Tarban Lunatic Asylum, where he was a "Gentleman (Lunatic)". The causes of death were general paralysis and exhaustion. He was buried on the 5th April in St Stephen's Church of England Cemetery, Penrith. His wife's family background is very interesting - she was the granddaughter of Sir Thomas Jamison, MD, and daughter of Sir John Jamison. Her sister Mary Elizabeth married Captain Russell's brother, Frederick Browne Russell. The Jamison family built and lived in a magnificent Georgian-style, sandstone mansion on a rise overlooking the Nepean River called Regentville House in honour of the Prince Regent. 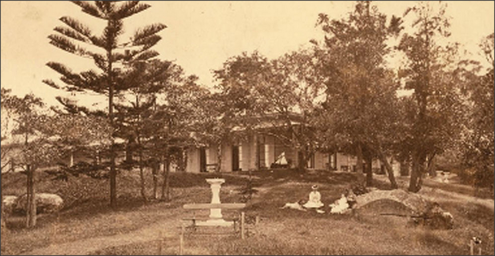 Admiralty House, Kirribilli, Sydney circa 1880 when it was called Wotonga and was owned by Mr Thomas Cadell
Presumably Augusta lived at home with her mother and siblings until her marriage, and then moved to the Williams family home in Careening Cove. Cyrus was only eight, and his brother Harold 11 years old, and whether they had any sort of reaction to their father’s remarriage is unrecorded.  They would have remained at the family home, though they seem to have spent all their holidays with various Doyle families, and to have spent weekends visiting their Aunt Amy at her home in the Sydney suburb of Burwood. Their sister Lucy however, according to Cyrus “left my father’s house on his second marriage in 1870, when I was eight years old, and never re-entered it.” She was thirteen years old, and went to live with Doyle cousins who at the time owned Wotunga on Kirribilli Point, about 1 kilometre from Careening Cove. Wotunga is large, Italianate, sandstone mansion and is now called Admiralty House and serves as the official Sydney residence of the Governor-General of Australia. It is visible from the harbour directly opposite the Opera House. She also spent time with her Doyle grandparents and other family members living on various runs and farms in the Hunter Valley. 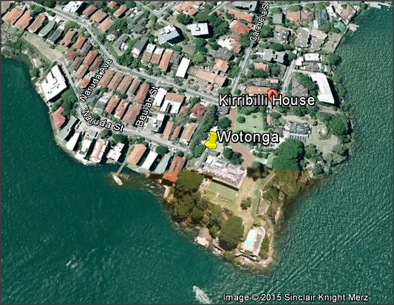 Admiralty House (Wotonga) via Google Earth
Willie and Augusta had five children in the next six years, two of whom died shortly after birth:

In 1878 Willie and Augusta and their growing brood of small children moved to Brisbane to live. Whether Willie’s job required him to move, or whether it was a matter of choice that they should leave Sydney is not known.  It seems likely that he was promoted as he became the Manager of the Australian Steam Navigation Company (ASN), one of the biggest shipping companies in Queensland.

Cyrus, who had been sent at the beginning of 1877 to live with his paternal aunt Georgiana Maltby at Yass where he attended Yass Grammar School, rejoined the family in Brisbane in June 1878, starting at Brisbane Grammar School in the fifth form. He writes at some length in his Journal about the school, but at even greater length describing the yacht Dolly Varden his father had bought on arrival in Brisbane with someone called “Gusley Larkin (then editor of the "Queenslander", and afterwards of “The Evening Post", Wellington)” on which he and the family had a number of adventures and misadventures.

On 2nd January 1880 Cyrus “joined the Harbours and Rivers Department as an engineering cadet without salary and as a pupil of the late William David Nisbet, M. Inst. C. E.”. Shortly afterwards he left home to continue his apprenticeship in the field, under the guidance of senior officers of the Department.

The Williams family lived in Kangaroo Point, a smart suburb of inner Brisbane, handy to the offices of the ASN, and near the wharves. Willie was Manager for several years while his family continued to grow with the addition of four more sons and finally another daughter (of whom more anon) :

Register of Deaths in Brisbane in 1886, Entry for Augusta Williams
However, in April 1886 disaster struck the family again when Augusta died, leaving Willie a widower for the second time. At the time of Augusta’s death the family were living in Felix Street, close to both the river and the Botanic Gardens, and presumably adjacent to the wharves from where the ASN boats arrived and departed.

The cause of Augusta’s death, according to the death registration was “Irritation of the Brain” and “Acute Melancholia”. Perhaps bearing and producing 10 children in 15 years, and losing four of them in infancy was more than Augusta could tolerate. Only four children were noted as being alive– Reginald (age 13), Beryl Muriel (10), Clive Cedric (7), and William Claud (5). The youngest children (Russell and Augusta) seem not to have been taken into account. As Russell’s birthdate was 15 August 1885, it seems odd that another baby could have been born within the next seven months, and survived. There is no birth registration for a child called Augusta Cecile.  It would seem most likely that Augusta may have been suffering from what would now be called post-natal depression.

[i] In Australian history, a squatter was typically a man, either a free settler or ex-convict, who occupied a large tract of Crown land in order to graze livestock. Initially often having no legal rights to the land, they gained its usage by being the first (and often the only) Europeans in the area.